Storms and the Beetroot Tree!

Well we all prepared, the wind howled, we waited.....and not that much happened where I live and I'm very happy about that because not everyone was as lucky.  If you suffered from the effects of the storm where you live I hope you're all ok. I took advantage of the horrible day to stay in and dye some aluminium sheet and one of the designs was inspired by the severe weather.  I painted swirls in shades of blue which were a little like weather maps and a little like spirals of wind. Hopefully they'll look effective when I make them into jewellery!

Last blog I talked about the forthcoming exhibition at The Beetroot Tree Gallery so I thought I'd show you their publicity material and if you're in the area, then do make sure you pop in and say hello, they've got some lovely things. 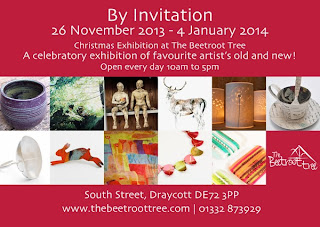 I've also cut out and made some other lovely pieces in the last week and I've called them the Batik Collection because they really do look like handpainted silk. Let me know what you think and I'm also interested in finding out out whether you prefer necklaces or pendants, so please do give me feedback. 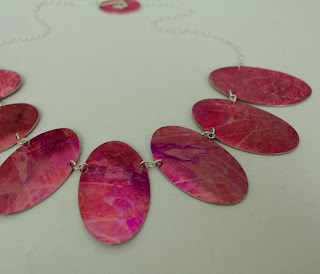 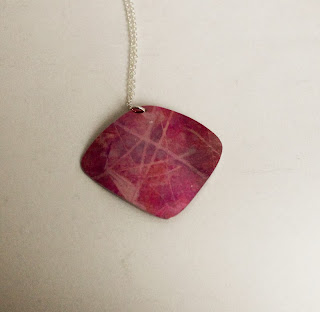 Do you like the new shape I've been working with?

On the 9th and 10th of November I will be at the Christmas Craft Trail at Cotehele National Trust property. Come and see me if you can!
Posted by Unknown at 08:18 No comments:

A Week of Xmas Treats for You!

Hi there everyone, it's blog time again!

First of all I want to give you all a little treat for following my blog - a 10% discount for my blog readers - just quote Xmas Treats at the checkout for your discount which is valid until the 21st October. A little Xmas pressie from me at Val at SlickSilver Jewellery! Whilst you're looking for what you're going to treat yourself to, please head over and check out my brand new Inspirations Blog - this blog will continue unchanged but i'd love it if you gave the new one a quick glance too.

This week I've been working on a new shape and design and since I really like it I'm probably going to keep Seaspray1! 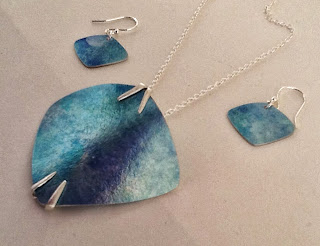 I've also got quite a few exhibitions coming up and I hope that some of you will live close enough to visit one of them. 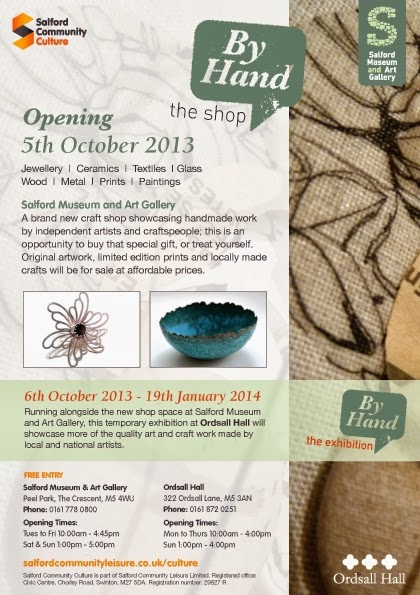 I will also be exhibiting at The Beetroot Tree Gallery in Draycott, Derbyshire from 26th November through to the 4th January.  My work will be specially featured on the 18th/19th December.  The organisers have set up a Facebook page so it would be great if you could show your support! Thank you. The Beetroot Tree 'By Invitation'

Ok, everyone, remember to pop over to use your discount code and you can use it as many times as you like in the next 7 days!
Posted by Unknown at 05:32 No comments:

It's been too long!

Hello again, sorry if you thought I'd deserted you all - not so - just that life has been throwing a few brickbats of late!

Well, when I last blogged, we were about to kick off our Open Studios event. Well there's a lesson in how to keep a house pristine for 10 days!!! None of the usual garlicky, spicy smells associated with our love of cooking, a duster permanently attached to my person and a constant need to straighten pictures! We did meet some lovely people though.

Devastatingly, I lost my lifelong friend to cancer towards the end of Open Studios, she'd only been ill a short while.  She lived in France and we chatted frequently through Facebook about life in general and stuff that our grown up children were up to. We had been best friends since the age of 11 and she had a wicked sense of humour and so a photo of us together has gone up in my studio so we can still natter and she can have a giggle at me every time I get something wrong! This and visitors is the reason that I've been absent for a few weeks.

So what else has been happening?

Well, exhibitions seems to be the key word for me at the moment! I know that I'd already mentioned the 'By Hand' exhibition at Ordsall Hall in Salford which takes place from mid October until January and I've just found out that I've been selected to take part in 'Past, Present and Future' Drawn To The Valley exhibition at Mount Edgcumbe Country Park from 19th - 27th October. I've also been asked to be part of 'By Invitation' at The Beetroot Tree Gallery in Derbyshire which takes place from the end of November.  This is the first year that I've been asked to exhibit outside Devon so it's pretty exciting!

I'm also going to be starting another blog which will be more pictorial and will be part of my website.  It will centre on what inspires me to make jewellery.  This blog will continue in it's current form and will continue to be linked to my website, but I hope that some of you will want to come and check out the other blog too!

As all of the work I've done since Open Studios has all been for submissions I thought I'd show you instead a couple of the designs that have been dyed and which are ready to be cut out and made up into new pieces. The photos are not brilliant because it's quite hard not to get my own reflection in when they're in flat sheet form. The top photo is called Batik, the bottom design is called Seaspray and the middle pic is of a new range (Sqiggles) of dyed aluminium rod which I've forged into shape. I'd love to hear what you think of them. 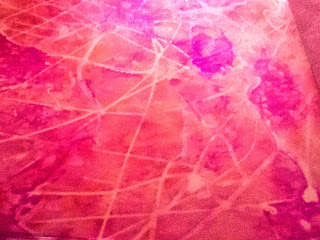 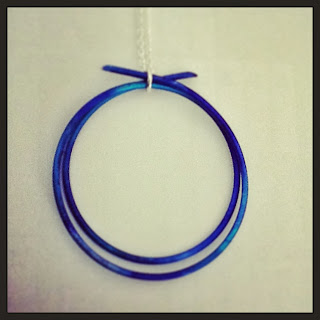 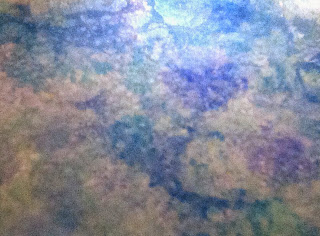 Ok then, I'll be back next week hopefully!