Well this week seems to have gone by in a blur of working on the brand new upcycled jewellery range but more on that later!

In my last couple of blogs I mentioned that I wanted to start a new feature entitled Three Beautiful Things.  This will take place every few weeks and this is my first one.  To start us off I thought I'd feature artist and composer David Muddyman (yes, I know he's my husband, but he's a pretty cool guy!!).
Dave is an artist, composer and member of the group Loop Guru. As an artist he is interested in the landscape around him and his work can be figurative or go towards abstraction as he looks at the shapes and lines within a landscape. As a composer he often creates sound pieces that echo his painting interests, trying to capture the musical essence of a place or take you on a sonic journey.

I asked Dave to tell me about his 3 things and this is what he said.
“This is going be so hard as sometimes beauty is intrinsic to a piece of art itself and sometimes it is the associated memories that add to its beauty.
My first piece is a painting by Cornish artist Saul Cathcart. It is an acrylic on canvas painting of Brown Willy on Bodmin Moor painted from a dell called King Arthur’s Hall. I was introduced to Saul’s work by Val soon after we met. I loved the vibrancy of his colour and method of applying the paint. Soon after we moved in together Val and I visited Saul and were treated to a mini exhibition in a local church opposite his house near the Moors. We had been determined to treat ourselves to one of his paintings for our new house but ended coming away with two – even then it was a hard choice. This painting has added significance to me I was lucky to go out painting with Saul one freezing, November day and he took me to the spot where this was painted. Saul’s paintings have continued to blossom and every exhibition of his we attend has several that I love but we live in a small house already covered in paintings and I am still so happy with the one’s we have. 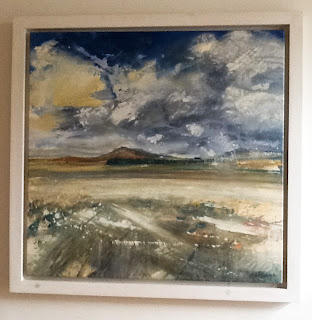 My second piece (or pieces) are a small collection of pots. I have always love pots – sometimes it is the shape, sometimes it is the over-glazing. I knew I would have to include one in my list of favourite things but the choice was difficult. In the end I chose a small selection that we bought in the . I feel bad that I cannot remember the potter’s name and, in fact, I can’t remember exactly where they were bought, but with these it is partly the pots themselves that I love but it also the memories of one the most wonderful holidays I have had there that made me choose these. I think they may have been bought at the Percy Gallery in Cockermouth – a wonderful old building full of treasures. We frequent a lot of galleries and have found that some we walk into hold no interest at all and some are like a lost cave of delights. It is obviously down to taste and some gallery owners have similar taste to us. Cockermouth itself was a beautiful town and it was so sad to see it flooded the following year and realising that the ground floor of the Percy Gallery was under water….. The ceramic pieces themselves are quite small with abstract design which, to me has a Japanese feel to it (I have always loved contemporary and historic Japanese ceramics). They were not expensive, but value is relative and I can get just much pleasure from looking at a pot that cost me £15 as I could from a Bernard Leach (possibly even more pleasure as I would worry much more about the cat breaking a Bernard Leach pot). So, memories and motif combined to make these pots some of my favourite things. 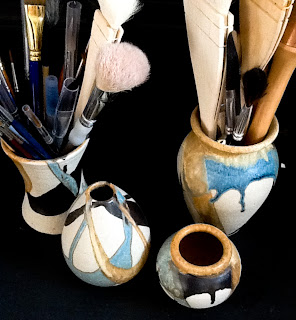 My third piece is my Appalachian dulcimer. While not really a work of art, being a new and relatively unadorned dulcimer, its beautiful is in its form and in its sound. For one thing it is an instrument that is very difficult to sound horrible. Its three courses of strings for drone, usually based on a root note of D, and the scale of the frets either form a Mixolydian scale or an Ionian (or major) scale. It was used to accompany folk songs in . It just makes me think of sitting of veranda of a shack in hilly glade as the sun is going down. The only problem is that we don’t live in a hilly glade or have a veranda in Plymouth, but maybe when my talented wife becomes famous for her wonderful jewellery and we have our house in St.Ives…. ah…..everyone needs a dream.” 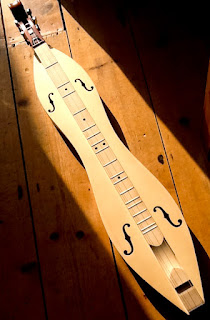 Thank you Dave for kick starting my Three Beautiful Things blog feature.  If you would like to take part do let me know.
So, does anyone want to know details of the upcycled book jewellery? I took some previously loved hardback books and laminated them with retro prints, sealed them and then they were laser cut.  So far I have a selection of necklaces which will be on my website in the next couple of days SlickSilver Jewellery and I'm also working on a series of pins too. The great thing is that they're only £15.00!!! I will also be selling these at craft events. 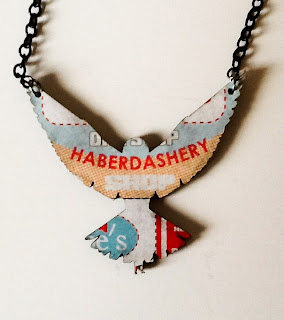 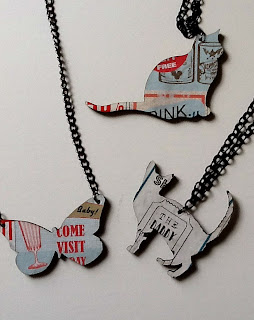 Make sure you get yours - there's loads of shapes to choose from!!

See you next week!
Posted by Unknown at 08:19 No comments: